Managing and Motivating Velocity Employees in Their Twenties

Managing and Motivating Velocity Employees in Their Twenties.
With younger people are more than 60% of our total work force, it will be good idea to step back and remind ourselves an importance of managing younger associate more efficiently than others.
Who is good manager for young people? ¬

- Encouraging helping others and explain our reasoning for decisions. These short explanation usually       make junior employees excited, since they feel the immediate benefits of gaining insight into decision-making processes. It also teaches them how you think.
-  By setting up regular teaching/ developing sessions for them on different parts of the business or personality.  In fact small companies like ours sets up mini-workshops to expose highly promising younger employees to different parts of the company.
-    By publicly rewarding junior team members who are doing a great job. The traditional way is to stand up in front of your group, explain what the superstar of the moment has been doing well, and thank. Another good but rarely used method we can implement is to ask them in front of others what he/she thinks they got selected. The question itself will be confirmation of his growth within the company by saying something useful for others.
-          Throw them into the deep end on their first day. Excellent managers of younger people give them decision-making authority on at least one mission immediately. They make everyone in his company "CEO" of something. That's the great idea. If they don't know how to do it, tell them to figure it out. The irony here is that you need to learn helplessness. If you don't, they won't improve. And if letting them solve it on their own feels like too big a risk for you, reconsider assigning the project in the first place. There's always another mission that can be a better fit. As the necessary last step, once they have completed the objective, give clear feedback immediately. Post-mortems are critical accelerators of their learning process.
-     Ask frequent questions. When you're walking around the office, or standing at your desk, ask your junior colleague "what's the dumbest thing we're working on?" The fact that you're asking that kind of question will carry impact on its own. It will show that you invite and insist on truth-telling and on hearing bad news. Sometimes the answer will also make you realize that something the company is working on is actually quite dumb and a waste of money. And sometimes the answer will surprise you in a different way: the employee may think that something he or she is doing is dumb when, once understood in context, it is actually quite useful to the business. When you hear this kind of answer, consider it a great learning for yourself: something has remained unexplained for the team.
- In fact research has found that, young age people are generally much more motivated by acknowledgement than that of modest rise in salary.
- Give them personal attention. A simple and little-used approach that goes a long way is to call them on their birthdays. That's it. Just call and say "happy birthday, glad to be working with you, hope you have a great celebration." They'll be glad you remembered, you'll feel good about it.

- Set very short-term projects. Young employees have short attention spans. Blame social media, the movies, or whatever else. But it's true and real, and you need to adapt as a manager. A good approach is to set weekly cycles so that every employee knows on Monday morning what he/she must tackle by Saturday, you can send personal email to them. In some cases, set daily goals. You'll find it remarkable how productive a short attention span.

- Fire those who are not performing. Younger people are also getting negatively motivated when others don’t perform in their jobs. In fact one toxic colleague can destroy an organization. Younger employees often haven't developed the ability to wall off the toxin.


- And finally, wear authority lightly. They take it more seriously than you think. Most of time managers of younger people can easily mistake informal body language and sometimes rude communications style for disrespect. Don't ever do it. They are professionally immature and of different generation. They are following your leadership much more closely than we might think.

This article has been modified by Mayur Palod with a belief that managers and younger associates at Velocity would able to channelize their capabilities.

Posted by Velocity Logistics at 9:46 PM No comments:


As you know the role of the above persons, suppose you have gone to any pathology lab for blood test, firstly lab attendant will take your blood and give the report to nurse, she will evaluate the report as per her knowledge and finally pass on to to doctor, and then he do the  the analysis of the disease then he decides  whether you requires medicine, injection,capsules or some thing else.

Choose your option by there role what you want to be...
- Illustrated by Mr. Rupert D Mello (Amway)

(3.) New Concept Beginning - We had started hurdle meeting in different levels at Velocity to develop the synergy among the team & for fulfillment of commitments given. This is around 5 minutes activity which covers -
(a) Today's 1 priority work.
(b) Reporting of previous hurdle meeting.
(c) Hurdles for the day


Everybody in the meeting suppose to contribute there points on above agenda.


(5.) In Wockhardt depot external audit has happened for 6 days by 6 persons also on Monday Mr. Sanjay Agarwal(AVP- Audit dept., Wockhardt) has visited to review the audit happened, he given a remark that godown is well maintained & also showed satisfaction on overall work procedure adapted by us as per company policies.


Posted by Velocity Logistics at 1:41 AM No comments:

From last 11 years we are regularly organising the sport day. The purpose of this event is to bring all the staffs under one tree and to develop team spirit, increase the competitive nature among them for best results.
Sport day organised  celebrated in Velocity on 13th Feb 2011.Following were the games that has been organized -
1.) Cricket
2.) Chess
3.) Carrom 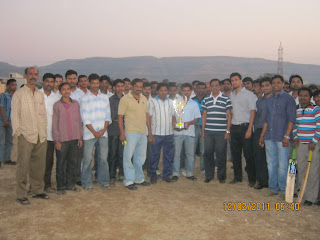 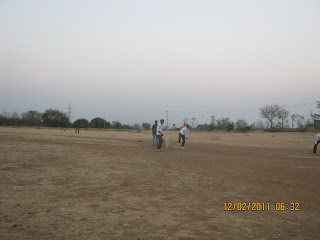 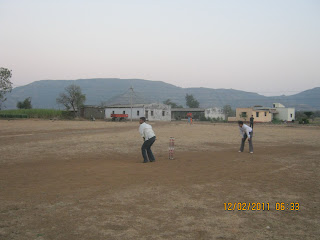 In Cricket we have arranged league matches between the depots. The total 55 player were participated very enthuasistacally in cricket matches  .The teams are as follows-
1.) Pidilite
2.) Lupin
3.) Wockhardt
4.) Amway
5.) Velocity

In first round following  3 teams has won the matches.
1.) Pidilite
2.) Lupin
3.) Wockhardt

In the final fight has happened between 2 tough teams(Lupin & Pidilite). Lupin has won the match with very narrow margin by 6 runs. In the final from Pidilite Mr. Ganesh Modak(Captain) has made 22 runs & Mr. Ashok Kamble has bowled well. From Lupin Mr. Anil PArdesi(Captain), Vishal Ghule & Nitin Kadam has batted well. 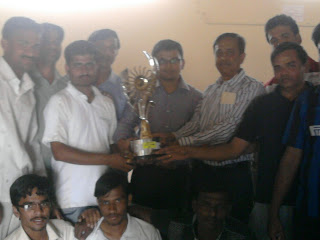 In Carrom total 20 staffs had participated in doubles competition, in that Mr. Promod Sutar(Lupin) Mr. Kiran Suryavashi(Pidilite) has won the final match. 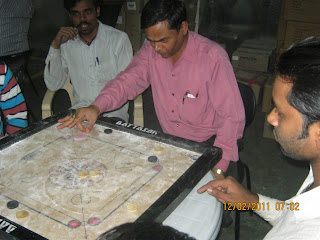 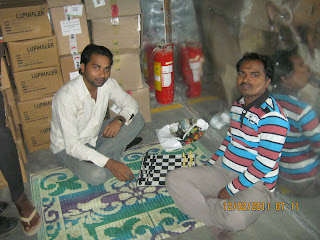 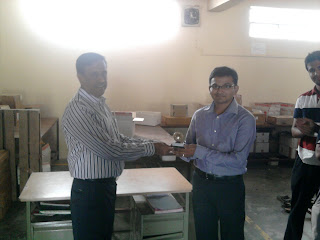 At begining of the programm  Mr. Avinash Wani has given introduction of Mr. S. Mehta & Given thanks to Mr. Sanjeev Palod & Mr. Nikhil Palod for organising the sport activity.

Mr. S.Palod told  that through sport team spirit  &  positive competitive energy creation is happening.
Also he & everybody congratuluate  Mr. S. Mehta for his engagment happen on Saturday i.e 12th Feb.
Mr. S. mehata told that , he has very happy to see such activity & said i am getting energy from all of you that is my gain .
Cricket Velocity Chanshak  has given to Winning team Lupin by Mr. S.Mehta & Mr. S.Palod .
The Best all-rounder awards given to Mr. Nitin Kadam , best bowler  Mr. Rajesh Roy &  Best batsmen Anil Pardeshi.

Mr. Sanjeev Palod has started a New Award called Velocity Award & It was given to Mr. Avinash Wani. 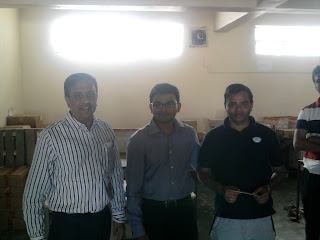 For all staff  Mrs. Sharda Palod has made LUNCH arrangement . Thanks to her for good food given to all the team.

Thanks to all the organiser .

Posted by Velocity Logistics at 1:59 AM 3 comments:

New Delhi: Wockhardt Limited has posted a consolidated net profit of Rs141.67 crore for the third quarter ended 31 December 2010. The company had recorded a net loss of Rs181.23 crore in the corresponding period a year ago, it said in a statement to the Bombay Stock Exchange (BSE).

Net sales stood at Rs950.80 crore in the period, compared to Rs889.33 crore in the corresponding three months in the previous year, PTI reported. The Wockhardt share price gained nearly 5% to Rs398.40 today on robust results. "The company has reported good growth across geographies. Its operating performance is very strong," said an analyst at a brokerage.

Amway India Enterprise posted a turnover of Rs 1790 crore for fiscal year 2010 registering a 27 per cent growth over the previous fiscal of Rs. 1490 crore.

Company’s lead categories – nutrition, wellness & cosmetic contributes over 60 per cent of its revenues.

Company has invested Rs. 55 crore at its contract manufacturer plant at Baddi where it produces 123 products under its portfolio excluding seasonal offerings.
POEM FROM MR. NITIN (WOCKHARDT) 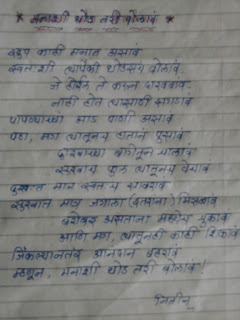 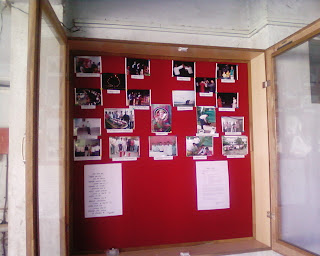 Due to Celebration wall creation we are hoping for creating a prosperous and happy relationship among the employees within the organization.

(III) We are proud on Mr. Ganesh Modak& his Team of Pidilite for hatric achievement of  70 out of 70 marks in CFA rating done by company for the quarter Oct 10 to Dec 10. Hearty Congrats 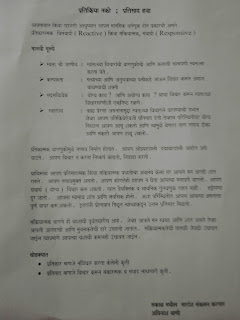 Posted by Velocity Logistics at 1:38 AM No comments: 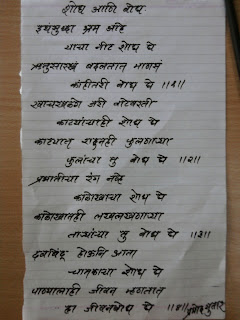 Posted by Velocity Logistics at 1:37 AM No comments: